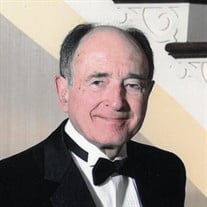 Robert Lancaster Folger ("Bob"), 94, was peacefully promoted to his heavenly home, September 19, 2020. After suffering from a stroke, he died at home surrounded by loved ones. A memorial service will be held Saturday afternoon, October 3, 2020 at 3 o’clock, at Fairview Presbyterian Church. The public is also invited to view the service via livestream on the Posey Funeral Director's Facebook page. He was born in Chicago, Illinois, on January 27, 1926, and was the son of the late John and Dorothy Folger. In 1943, he attended high school in Winter Haven, Florida, and was a finalist in the Westinghouse Science Talent Search. He graduated in 1948 from the University of Illinois as co-salutatorian with a Bachelor of Science in chemistry, having returned to college after serving in the U.S. Army as an intelligence officer during World War II. Upon graduation, he married Joanne Shanks, who remained his beloved wife for over 64 years. Subsequently, he received his Ph.D. in nuclear chemistry from the University of California, Berkeley, in 1951. Hired by DuPont, he spent two years at the Oak Ridge National Laboratory in Tennessee. He then moved to North Augusta in 1953 and spent the remainder of his career at the Savannah River Plant, where he was Manager of the Analytical Chemistry Division until he retired in July 1985. Dr. Folger served on the Aiken County Board of Education from 1966 to 1969 and was Chairman of the Board in 1969. In 1974, he was elected as moderator of the Synod of the Southeast, Presbyterian Church in the U.S., the first layman to serve in that capacity. He was a member of the Augusta Christian Businessman's Association. Bob was a faithful member of Fairview Presbyterian Church since 1953 and served as an elder on the church session and as a Sunday school teacher for many years. Although science was his vocation, Bob was a devout follower of God's Word and was committed to spreading the Gospel. Family was very important to him, as well as the traditions that go with it. Bob loved music and loved to sing. He would often provide renditions of popular World War II songs at home and recite poems in German (he had been the translator for his battalion) while his children listened. He had a great sense of humor and a hearty laugh. Bob enjoyed spending time over long meals with family and friends, especially at the Pinnacle Club. He and his wife also loved to travel and shared many foreign and domestic trips with their children and grandchildren. They also enjoyed being part of the community where they vacationed in Sugar Mountain, N.C., where Bob served for years as chairman of the condominium board at The Branches. Bob was pre-deceased by his wife, Joanne, and sister, Dorothy Folger Pence. He is survived by his brother, Dr. John R. Folger (Hilda) and brother-in-law, James Pence; his son, Robert G. Folger (Pam); his three daughters, Susan Cutchins (Don); Beverly McCoy (Randy); Beth Grosso (Mike); eight grandchildren: Marc Folger (Joanna), Jack Folger, Margaret Baker (Jeff), Curt Holzer, Claire Born (Chasen), Dr. Lindsay Grosso, Shelley Hoffman (Bryan), Michael Grosso; and five great-grandchildren: Sheila Folger, Judson Baker, Lillian Baker, Diana Born, and Margaret Born. The family would like to thank the Daybreak caregivers for their devotion to caring for Dr. Folger the past five years. In lieu of flowers, donations to Fairview Presbyterian Church, 1101 Carolina Ave., North Augusta, S.C. 29841, or St. Joseph Hospice, 1708 Bunting Dr., Ste. A, North Augusta, S.C. 29841, will be welcome.

Robert Lancaster Folger ("Bob"), 94, was peacefully promoted to his heavenly home, September 19, 2020. After suffering from a stroke, he died at home surrounded by loved ones. A memorial service will be held Saturday afternoon, October 3,... View Obituary & Service Information

The family of Dr. Robert L. Folger created this Life Tributes page to make it easy to share your memories.

Send flowers to the Folger family.