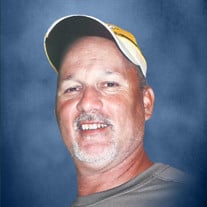 Stephen “Steve” Joel Clements North Augusta, SC – On the morning of April 16, 2022, Mr. Stephen “Steve” Joel Clements, 63, passed away while surrounded by his beloved family, following an eighteen-month battle with cancer. Funeral Services will be conducted Wednesday morning at 11 o’clock at Victory Baptist Church with Pastor Mike Mattero officiating. Interment will follow in Adams Chapel Cemetery, Harlem, GA. The family will receive friends at the funeral home Tuesday evening from 6 until 8 o'clock. Steve was born in Augusta, GA on January 17, 1959. He was the first son of Jo Ann and Jack Clements. Steve grew up playing football and baseball. He continued in his love for small town sports by following and supporting his North Augusta Yellow Jackets. Steve was also an avid Georgia Bulldogs fan. He loved his red and black and was known for saying, “Once a dawg, always a dawg!” Steve’s favorite canine companion and best friend was Murray, his dog. They shared many walks, rides in the truck and bowls of ice cream together. Steve was an active member of Victory Baptist Church and loved his church family. He had a strong faith, loved the Lord and had a servant’s heart. Steve’s passion in life was fishing. He inherited this love of fishing from his dad, who started him out very young. Steve spent many days honing his craft, learning how to catch bass and proved he was very skilled at it. He never missed an opportunity to get out on the water. Steve was a true outdoorsman and always took time to foster beloved friendships, never meeting a stranger. He will be fondly remembered for his contagious smile and fun-loving nature. Steve was preceded in death by his mother, Jo Ann Lowry Clements and his father, Jack Loryn Clements. He leaves behind his loving wife, Tammy Clements; his daughters, Natalie (Chad) Capitosti, Marina Clements and Samantha Clements; his grandsons, Rylan, Daniel and Sawyer Capitosti; a brother, Matt (Mandy) Clements; a nephew, Bailey Clements; and a host of beloved friends. Pallbearers will be Ryan Franklin, Matt Clements, Van Dickson, Chad Trotter, Tony Lewis and Craig Williams. In lieu of flowers, memorials may be made to Victory Baptist Church, 620 W. Martintown Road, North Augusta, SC 29841 or Aiken County Animal Shelter, 333 Wire Road, Aiken, SC 29801. The family would like to express special thanks to Steve’s oncologist and friend, Dr. Germame Ajebo for his compassionate care during his illness. Posey Funeral Directors of North Augusta is in charge of arrangements (803)278-1181.

The family of Stephen "Steve" Joel Clements created this Life Tributes page to make it easy to share your memories.

North Augusta, SC – On the morning...

Send flowers to the Clements family.